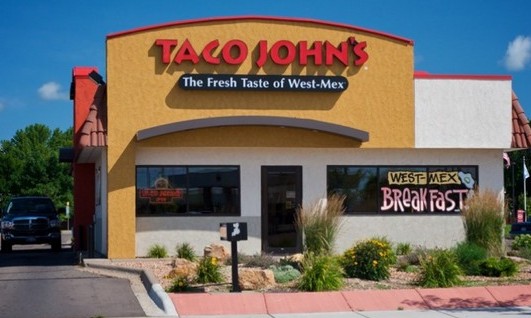 There are few businesses I can genuinely say I would travel miles to buy their product and one of those businesses is Taco Johns. For those that have lived with Taco Bell or similar establishments, I want you to know that Taco Johns not only delivers a meal, but they also provide experiences and memories.

As a child in Jamestown North Dakota, fast food, and restaurant chains did not exist beyond Dairy Queen, KFC, the original A&W Drive-In, and Pizza Hut until I was a teenager.  In my early teenage years, Hardees and Taco John’s opened up shop in our sleepy little town of 15,000 to be followed by the big boys a few years later.

I vividly remember pulling up to a building barely more substantial than a travel trailer and ordering my first fast-food tacos and chili, and I was in heaven. Sure, I had tacos at for school lunch when the goal was to have kids eat, but they were in no way comparable to the tacos at taco john. The chili also was rememberable since you could add all the hot sauce you wanted and this was before I had to watch what I ate. 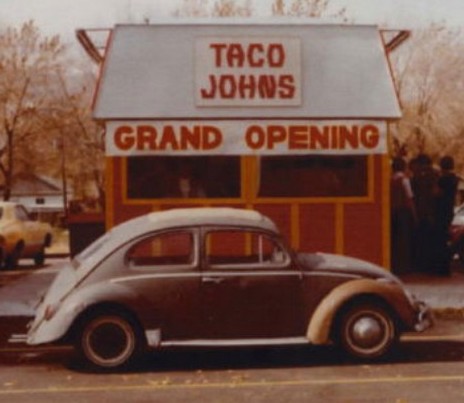 Once I received my driver’s license, Taco Johns became a regular for myself and friends since they were open late every night and at the end of cruising main and 10th street. Furthermore, Taco Johns food helped absorb some of the chemicals found in kids experimenting on the high plains of North Dakota.

During my teenage years, we would also travel to Glendive Montana to visit my cousins and behold there was a Taco Johns in Glendive. It was the worlds largest Taco Johns in the world since it had seating in it so you could eat inside Taco Johns instead of eating while in the car and having that familiar smell around for many days.

In 1980, I joined the Navy and was shocked to find that other Taco chains were bigger and supposedly better where I lived, but there were no Taco Johns. I would anxiously wait for my trips back home to eat at Taco Johns since the other chains we subpar in my opinion.

I retired from the Navy in the and moved to southern South Dakota with my young family and was happy to learn we had a Taco Johns in Vermillion South Dakota. Eating tacos was an easy sell since kids loved tacos, so both of our children learned to love a pound and a six pack which included one (1) pound of Potato Oles and six (6) tacos. 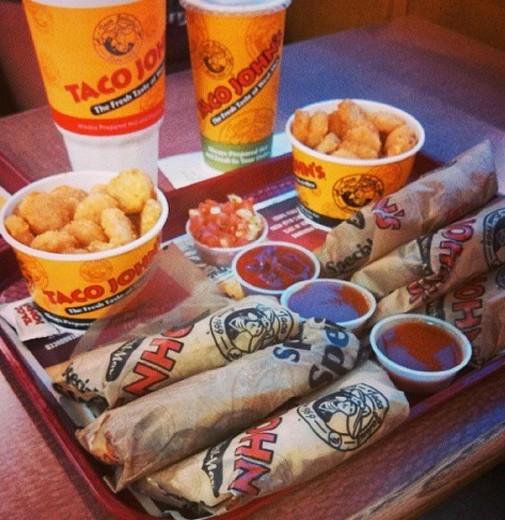 We moved to Sioux City Iowa about a year after retiring from the Navy, and Taco Johns was a favorite that we could all agree on for the next eight (8) years before moving to Missouri. Both of the kids grew up with Taco Johns and when we would travel there was unrest when Taco Bell or other chains were the only options.

After relocating to Republic Missouri, it became clear that the nearest Taco Johns was about four (4) hours away, so we ate less fast food tacos and tried to perfect our tacos and Potato Oles without success. When we traveled back to North Dakota, we would buy extra and freeze for later.

It had been nearly ten (10) years since we moved to Missouri and as I traveled southwest on I44, I saw a billboard for Taco Johns as I approached Lebanon Missouri. Did I imagine the sign or was it real? I pulled off the exit and drove .25 miles to find a Taco Johns had opened up sharing space with a recently build Conoco gas station.

I picked up a pound and a six-pack and drove my last hour home with that familiar Taco Johns smell triggering fond memories. Once home, I surprised my bride of thirty plus years and let the kids know that Taco Johns was only 60 minutes away.

We now make numerous special trips to Taco Johns to eat our favorite tacos, and when we are traveling, we will divert to pick up a pound and a six-pack.  Yes, I may be crazy, but I will always have a place in my heart for Taco Johns.

Do you have a favorite establishment that you would make a special trip to or divert your path to visit? Where and what is it?

Thanks for stopping by and sharing my memory. It’s great being fifty plus going on fifteen.

Have a great one, J