When my bride and I were married in 1987, we immediately left for New London Connecticut after the wedding since I was on military orders from San Diego. Renee’s brother traveled with us since he could not find a well-paying job in North Dakota had just graduated high school, so the trip was not very romantic.

It was our plan to go on a honeymoon after we arrived in Connecticut but between pets, kids, submarines, tenders, retirement, civilian careers, etc, we never enjoyed a honeymoon. We went on vacations, weekend trips, day trips, and dates but never punched that ticket.

Our 25th anniversary occurred in 2012 and we planned to enjoy a belated honeymoon. Unluckily, I was advanced to SVP of Field Service during this same timeframe, so we held off on a honeymoon again.

After I left my job in 2016, we decided we were going to enjoy our belated honeymoon, but our budget would not allow us to travel to St. Thomas or Hawaii, so we decided to go tent camping and UTVing in the South Dakota Black Hills.

Renee planned the trip and licensed the UTV, so we could travel on the trails, logging roads, and highways legally. We took off without the kids and dogs for a week-long adventure in God’s country.

We arrived in Deadwood South Dakota and located the campground we were staying at. We unloaded the UTV from the trailer, set up the tent, and inflated the air mattresses.

There were a few hours before dusk, so we started running the logging roads and trails towards Mount Custer. We passed open fields, pastures, abandoned farms, and forest areas that were cut long ago.

Traveling around a corner at about 20 miles per hour (MPH) with the afternoon sun in our eyes, we hit a large rut in the road and I heard a loud scream from Renee.

We stopped immediately, and it was obvious that the seat belt dislocated Renee’s shoulder. I walked over to her side of the UTV and popped it back into the socket. Renee can be a tough old bird at times. 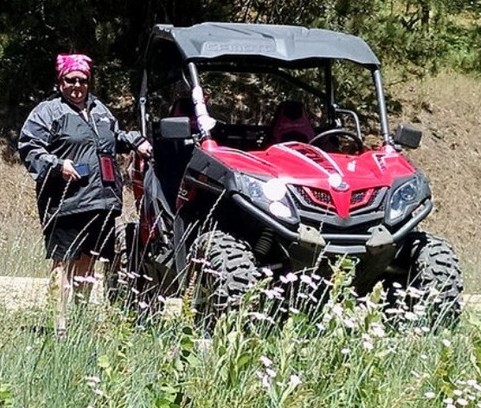 Renee Next To UTV All Good As New

We traveled on a skinny trail that wound around Mount Washington that started out about ten (10) feet wide at the bottom and ended up no more than five (5) feet wide at the top. The UTV is 50 inches wide and the drop off was 100 plus feet so we took our time until we arrived at the summit.

The view at the top of Mount Custer was inspiring and after taking in the beginning of dusk, we crept back down the trail and returned to camp to eat supper (dinner), finish setting up camp and start a fire to keep us warm. 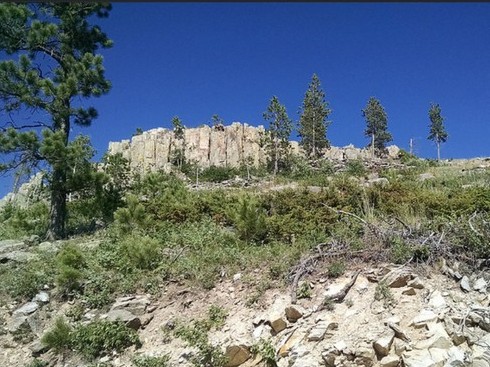 Mount Custer Half Way Up

Early the next morning, we were awakened to the sound of cows mooing. We slowly climbed out of the tent realizing that tent camping was much harder when you are fifty plus going on fifteen, but we would tough it out.

The sun was just breaking the eastern horizon and to our surprise, there was a herd of cattle in campground grazing on the campground grass and leaving organic landmines for unsuspecting patrons to enjoy.

As if that was not enough, cowboys’ road into the campground to herd the cattle back into the pasture they had escaped from. The trip had started out interesting. 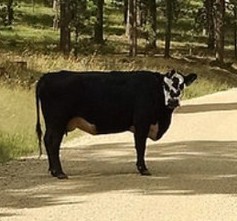 The Leader Of The Pack

We cleaned up, ate a light breakfast, and verified Renee’s shoulder was okay before we took off to ride trails and logging roads in the national forest.

During the next eight (8) hours, we put on roughly 100 hard miles climbing mountains, traveling through canyons, sitting by high mountain lakes, hiking stream beds, and enjoying a cold lunch that was perfect for God’s country. 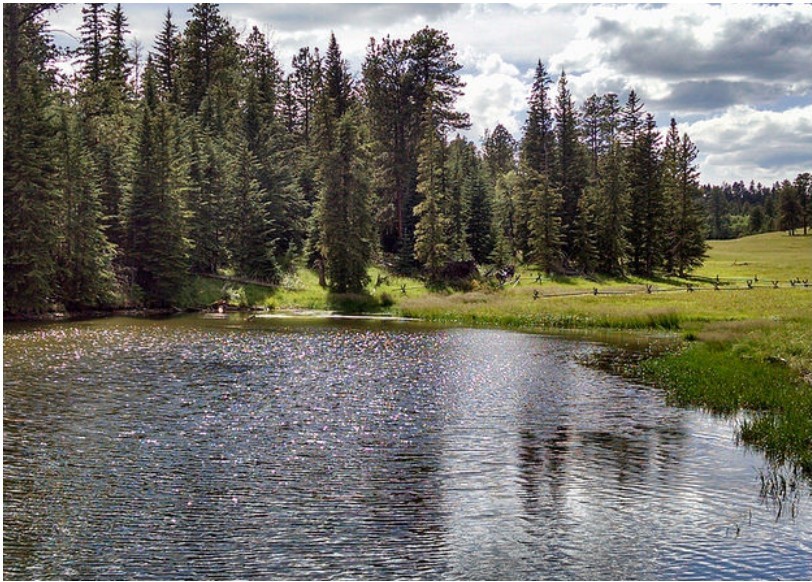 That evening, we returned to camp and treated ourselves to supper at the small café at the lodge with a cold Coors. I would not travel twelve (12) hours to eat at the café again but I would enjoy the backroads of the Black Hills.

The next morning, we rolled off the air mattresses again (a little slower on day 2) and we were not greeted by a herd of cattle but instead by a few deer.

We ate breakfast and broke up the camp loading the UTV and all camping gear on the trailer. We were on the road by 8 AM to our next honeymoon destination, Medora, North Dakota.

It took us nearly thirty (30) years to enjoy our long overdue honeymoon. Although we were a little long in the tooth to tent camp for a week, we had a great week and fond memories.

It would be great to hear if you have experienced similar trips.

Wishing you health, safety, and success. Tent camping is a little tougher when you are fifty plus going on fifteen.