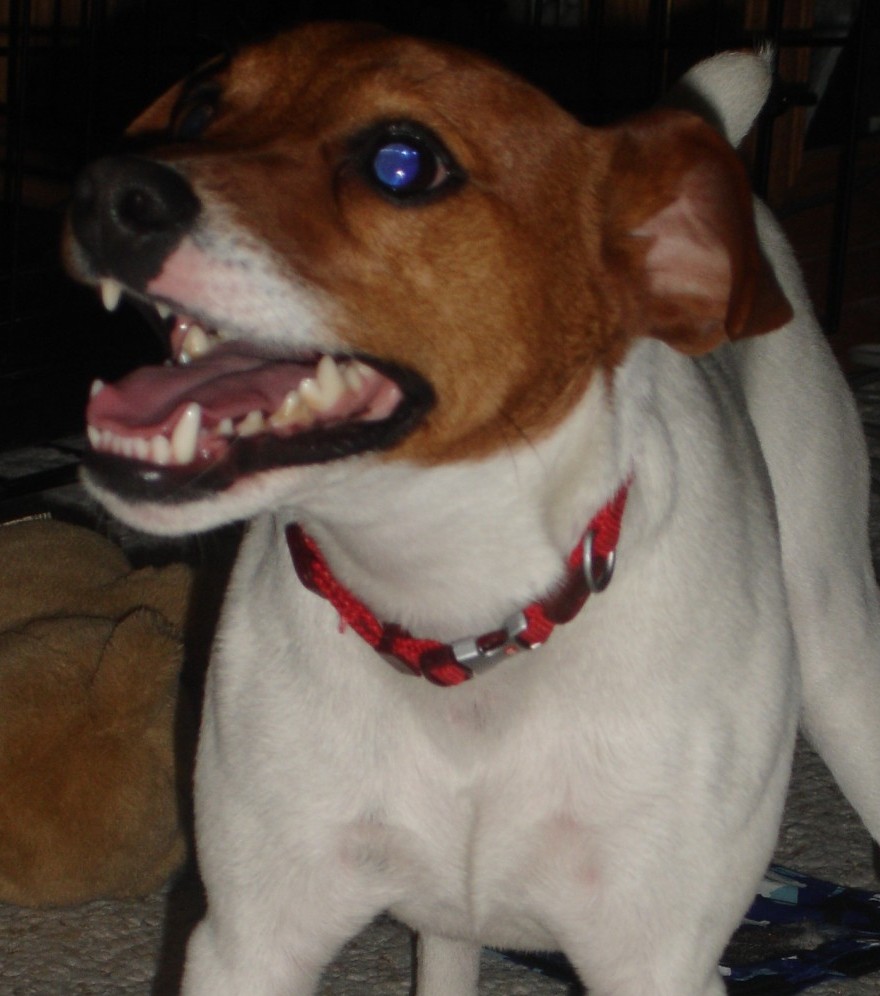 In this segment of Life Tidbits, I would like to share who Buddy Flash was and how we miss his presence, but he is forever with us in spirit.

Animals have always been part of my life, and from the winter of 2006 through the late spring of 2018, we had the pleasure of a rescue named Buddy Flash as part of our family.

After a year of fighting severe health issues and enduring diabetes shots twice each day, he told us it was time to cross the rainbow bridge at the age of 14.

In 2006, my family was living in Sioux City Iowa, and I was living in Republic Missouri with long-term plans of relocating the family when Ali graduated in 2007.  I would drive home every couple of weeks to spend time with the family and prepare for our pending move.

In late 2006, I traveled home before a winter front hit so I could enjoy the family although there was a chance of my getting snowed in for a few days. I arrived back on Saturday, and soon after coming I received a call from one of my employees in Iowa that he needed to find a new home for his dog.

I asked what was up and he told me that his Jack Russell did not fit into his family since he had small girls, his wife had a home-based day-care, and the dog nipped at one of the girls. We had brought another Jack Russell pup into our home in early 2006 named Scrappy-Doo, so I said why not.

I asked my bride if we could bring him in and she said yes but only to foster until we find a home or take him to the Humane Society on Monday. I loaded up the kids in our black Ford Expedition and drove two hours to pick up the dog.

The weather was nasty but not quite a blizzard when we arrived, and we found the dog chained up in the front yard, so I was glad we hurried. I picked up his belongings, learned that his name was Buddy Flash, and loaded him up for the drive home.

Buddy latched onto me as soon as we climbed in the truck and curled around my neck warming himself up and sleeping the entire way home. Once we arrived, we introduced him to Buster Brown our mature Golden Retriever/Lab rescue, Scrappy-Doo our pup Jack Russell rescue, and Delila our adolescent feline rescue. 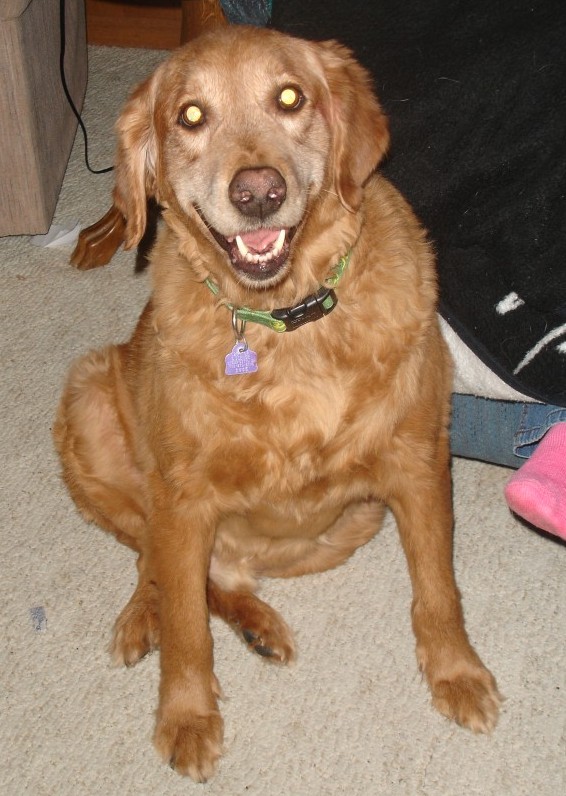 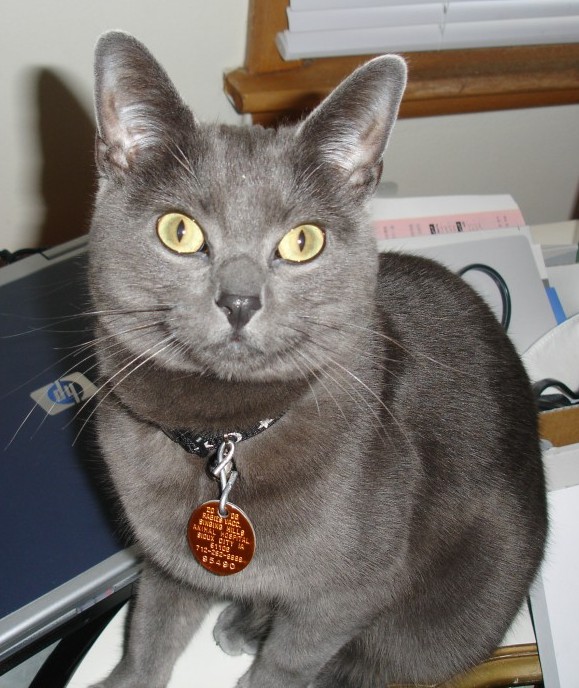 I was taking off on Sunday to return to work in Missouri and Renee was still planning on finding a home for Buddy over the weekend or taking him to the Humane Society on Monday.

It quickly became apparent that Buddy had socialization issues that would limit who and where he could live since he did not know how to play with other dogs, was aggressive when one of the other animals were in his bubble, and experienced extreme separation anxiety.

I left Iowa with a plan in place to take Buddy to the Humane Society since we had concerns about finding someone that would work with him to resolve his challenges. The last thing I heard was “Buddy is only staying the weekend” as I walked out the door.

On Monday, I checked in with the family to see how everyone was doing and to also see how it went when they dropped Buddy off at the Humane Society. Much to my surprise, Renee informed me that Buddy was still in the house. I asked what changed and she said we need to replace bad memories with good memories and add him to our pack.

Although Buddy was going to spend only one weekend with us, this was the first of more than 600 weekends to follow where he was part of our pack. I have always believed that animals choose their masters and I think that was what happened here with Renee and Buddy being inseparable.

Buddy had many quirks from his upbringing, and we made significant progress at socializing him even though he would occasionally revert to his gremlin state. He was Scrappy-Doos partner in crime in Iowa where we did not have a fenced yard and had to walk them and once in Missouri we had a fenced yard that became their Jack Russell kingdom. 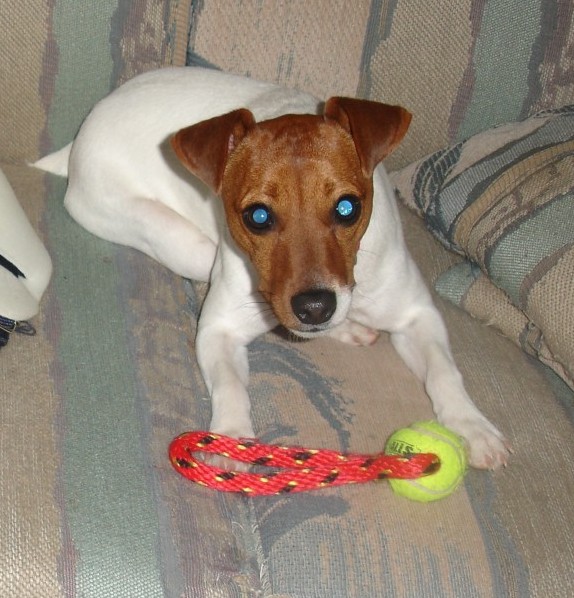 The years passed by with incidents becoming less and less and along with the years passing we lost Buster Brown to old age, and Delila climbed the fence and never came back one day bud Buddy and Scrappy were constant as sunshine.

Buddy and Scrappy had many routines including wearing a path in the fenceline and yard where they would run, digging moles out of the ground and bringing them in for mom, playing tug a war with snakes until they snapped, cornering skunks and other critters in the yard, and general mischief that you would associate with Jack Russells.

In 2014, we bought a camper and started camping again, and Buddy took to camping like he was a natural and he and Scrappy loved taking rides in the UTV, sniffing all the best spots to do their deed and cuddling in the camper. Buddy was ten and Scrappy was eight, and although the boys were both well fed, they were healthy.

During the summer of 2016, Buddy tried to jump on the couch like he did thousands of times before but his aim was off, and he injured his hip losing some mobility due to old age.  He was twelve years old, and the vet indicated there was no medical solution. During this same timeframe, Buddy’s liver numbers were also spiking so we worked with him to hopefully extend his life.

We wanted to allow Buddy and Scrappy to help train a new generation in our pack, so we brought Roxy Darma into our home at two months of age in 2016 and Buddy took her under his wing and taught her the ropes knowing that his time was coming to an end but not yet willing to cross the rainbow bridge.

In early 2017, Buddy had a few bad teeth, so we took him in for oral surgery, and when he returned home, he was extremely lethargic and not himself. We were extremely worried since he would not eat and that was the one thing Buddy could always do without prompting.

Blood tests came back, and we found out Buddy had diabetes and we would need to give him two shots per day for the rest of his life. We understood he could live a comfortable life so started giving him shots although we had to muzzle him before each shot.

Buddy was still not his old self when my mom passed away in May of 2017, so we took him to North Dakota with us to monitor and nurse him back to health. Traveling back from North Dakota, he crashed and would not eat again, so we thought it was time to take him to the vet one last time in Watertown South Dakota but 30 minutes before our appointment he ate.

The trip home was slow as we tried to minimize stress and in St. Joseph Missouri we stopped at a vet, and they told us to give him insulin even if he doesn’t eat at half dosage. We did and gave him Pedialyte to get him home to our vet in Republic.

From this point on in May of 2017 until May of 2018 we had good and bad days with Buddy still marching on, but we saw indications that he was becoming weaker and would probably not make it much longer. On Memorial Day weekend, we took Buddy camping one last time where he rode in the UTV, did his deed everywhere he desired and snuggled with us. 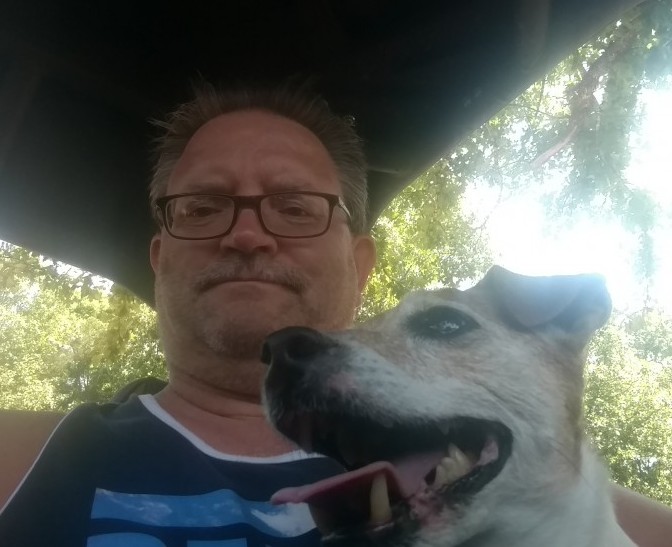 In early June of 2018, he slept more, ate less, had more accidents and did not have the energy or desire to continue. We took him to the vet to see if there was anything else we could do and the vet made some adjustments to medication, but it was time.

Without a change in outlook, we took our companion on a final ride, cuddled a little more, and the vet was kind enough to let him cross over the rainbow bridge outside the office under a tree as a train passed.

Roxy, Scrappy, Renee, our kids and I miss Buddy every day, and much like former companions, there is a small ghost looking over my shoulder at all times. Buddy’s ashes are in a small urn in our bedroom with Buster’s, and someday we will be reunited.

With Roxy’s and Scrappy’s blessing, we brought a new rescue into our home, and her name is Desi-Lu. She has many of the same issues Buddy had when we brought him home although she is only six months old. 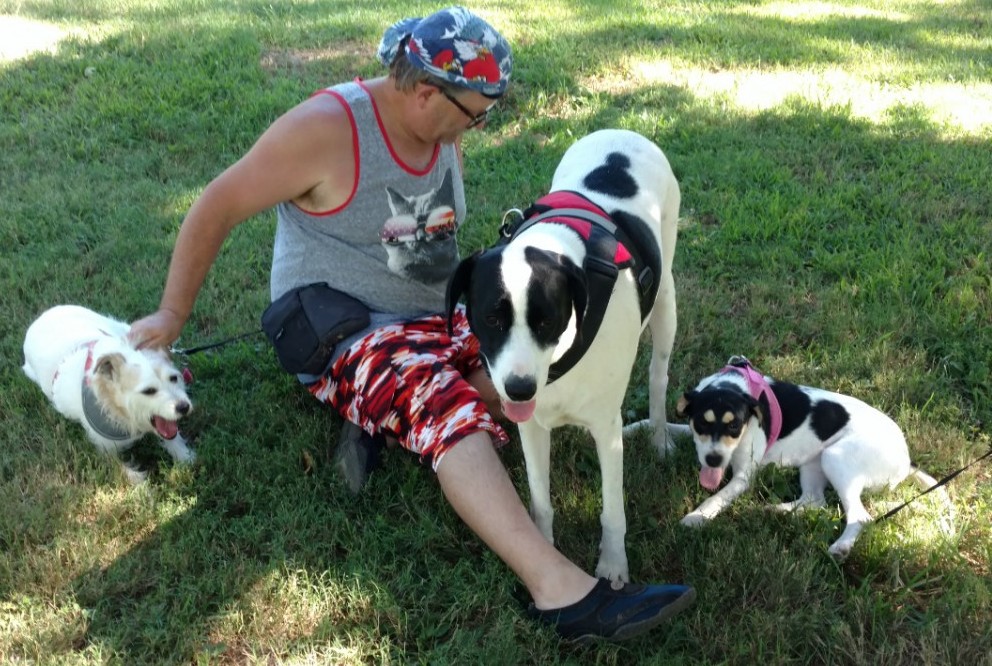 Desi-Lu had numerous homes as a pup, but she has made significant progress as we replace bad memories with good memories. It is incredible how she exhibits many of the traits Buddy had without meeting him, but we believe Buddy is helping her make the transition.

Have you had similar pet experiences? Please share if possible.

We miss you Buddy and will never forget you. Sometimes being fifty plus going on fifteen can be painful.