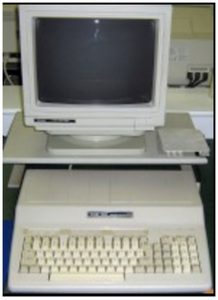 Wishing safety and health for those in Hurricane Irma’s path. We have been lucky for many years in the US but 2017 appears to be a heavy blow year,

Who remembers when we were told that PCs would make the world paperless? Well I remember and this is my story.

In the 1980s I purchased my first computer which was a Tandy 1000EX where you had to boot off a large floppy and soon after I joined one of the first online access companies “Prodigy” which utilized a dial-up connection. I was in the Navy at the time working as a Technical Instructor and Curriculum Developer at the submarine base in New London Connecticut and we have frame systems. I like many reading this were clueless where technology was going to take us.

In 1990, I was transferred to Kings Bay Georgia to work on older Fleet Ballistic Missile Submarines on the USS Canopus and was assigned to a hotel load division responsible for repair planning and estimating.

In planning and estimating, I was exposed to PCs and a software package called Word Perfect where you did not need to use specific key strokes to indent, bold, etc. like on the mainframe systems I had worked on in the past.

Word Perfect was the most incredible tool in the world that allowed you to not only build repair packages but you could also share the work packages, review and make corrections without printing paper.

Across the kingdom was cheer and joy because life was going to be much easier since you did not need to type, review, red line, white-out and correct. It could all be done on a CRT screen and we were told the Navy would be paperless within five (5) years.

During my time in planning and estimating we made numerous attempts to move to paperless activities and we even had new fangled laptops to take to repair sites but for some reason they were float tested by the repair technicians so we could not move away from paper repair packages, Do you think they were resisting technology?

It has been nearly thirty years since my initial dreams of a paperless world were dashed and although I have seen improvements in time we are still not there. Maybe the next generation will get us there?

How is your paperless world going? Wishing you the best, Jay Patterson