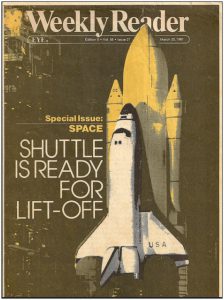 For most of us in the United States, the first news source we read as a child was “My Weekly Reader”. First established in the 1920s, “My Weekly Reader” was a window into current events that was directed at elementary schools until its demise in 2012. “My Weekly Reader” in its heyday was published seven (7) times a year and had up to 13 million subscribers.

Growing up, we followed the Vietnam War, Nixon, Moon Walks, Disney’s plan to buy land and build a new park in Florida called Disney World, the building of the World Trade Center in New York City, etc. in “My Weekly Reader”. If it was current news, it was probably covered and it is even possible that “My Weekly Reader” taught me how to boil eggs.

I have no idea how many children decided journalism, photography or other related careers were for them because they read “My Weekly Reader” but I know it made me read World Book Encyclopedias from cover to cover and read the local paper every day.

Today, we are inundated by entertainment journalism 24 hours per day on television and online while printed journalism dies a slow death. If only I could be as excited as I once was as a child when we would be given “My Weekly Reader”.

There were many written publications that I enjoyed in my formative years that were instrumental in my development and fun to read. Some of my magazines of choice included Boys Life, Mad, Cracked, and High Times but none of them impacted the sponginess of my brain like “My Weekly Reader”.

What was your favorite article in “My Weekly Reader”? Mine was the story on the World Trade Center in NYC.

Thanks for reading and have a great day.