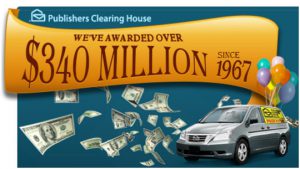 The beginning of a week of four (4) Mondays after a holiday started today and with it I will apply my thoughts on Publishers Clearing House the great American sweepstakes.

We all remember the possibility of Ed McMahon coming to our door and awarding us a million dollar prize but to this day I do not actually know anyone that has ever won the prize. I am sure it is not an urban myth but I don’t know anyone who has won.

Yesterday was the four (4) month anniversary of my mothers death and she would always fill out the paperwork for a chance to win the Publishers Clearing House million dollars from the time I was a young child until her stroke in early 2015. I always joked with her that there was no way we would win the Publishers Clearing House million but she told me if we did she would split it with everyone in the family.

After my mothers stroke in 2015, I took over the family responsibility of filling out the paperwork for Publishers Clearing House thinking perhaps her dream of winning a million dollars could be achieved if I continued the tradition. Initially, I filled out the paperwork that was mailed but wham…. there was an e-mail option that would send the info and link you to the prize submission websites.

Since early 2015, I have been submitting online sweepstakes, lottos, kenos, searches, etc., in an attempt to win the million dollar prize which has actually grown. I believe I have become addicted to these e-mails and although I have not won I will continue to keep my mothers dream alive and if I win, I will split it with the family and friends.

I find it somewhat humorous that I have selected this method to keep my mothers hopes and dreams alive but she understood the importance of financial security in helping you live a happy life.

Have a great, quintastic day and I miss you mom.